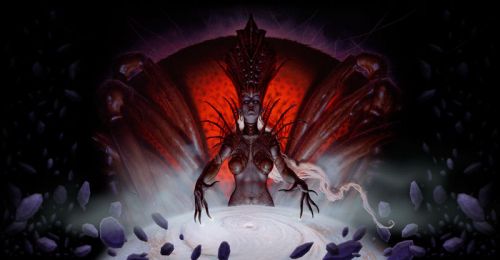 At PAX East, I had the chance to be walked and talked through the upcoming D&D Online expansion, Menace of the Underdark (MotU). As would be expected of a DDO expansion, MotU is story-driven. A fissure has opened up right in the middle of the capital city in Eberron which leads to other D&D realms, including the worlds of the Underdark and the Forgotten Realms. The Spinner of Shadows, Lolth’s agent in the DDO universe, is behind all this madness. Players will travel through four huge areas (the Demonweb, the Underdark, Evening Star, and King’s Forest) as a hero from another world, trying to unravel why the drow are invading the town of Evening Star and the nature of “the thread of the weave.”

If you’re familiar with the huge content updates for DDO, you may be interested to know that MotU is about the size of three large updates. The expansion adds the Druid class, completing the set of the core classes. Druids will of course have access to the shape-shifting goodness we’d expect, being able to fulfill multiple roles in a party through their various forms. These forms include wolf, winter wolf, dire bear, and elementals of various elements, all of which come with their own unique skill set. VIP players will have access to the Druid even if they don’t purchase the expansion, but in order to have access to areas, they’ll still have to pick it up. The expansion also adds challenge content and epic level (levels 20-25) content, increasing the level cap to a whopping 25 (remember back when the cap was 10?!). MotU will also add some additional mechanics to the game. For example, when players are in the Underdark, they won’t be able to see very far ahead of them. They will have to acquire dark vision to see more effectively. When players encounter drow out on the surface, they will cast Darkening, a skill that basically brings the Underdark environment to an area. In a cool and lore-centered twist, drow and players who currently have dark vision will take more damage from light-based spells and attacks.

I haven’t played DDO in a long, long time (haven’t had time to even try it since it went F2P), but as a D&D universe fan, it’s difficult not to get excited about the Underdark. MotU releases June 25th with the beta starting in May. Players wishing to adventure in the Underdark and its associated areas will have to make a one-time purchase of either the base, standard, or collector’s edition.

UPDATE: Turbine just released a behind-the-scenes trailer for Menace of the Underdark. Check it out below!