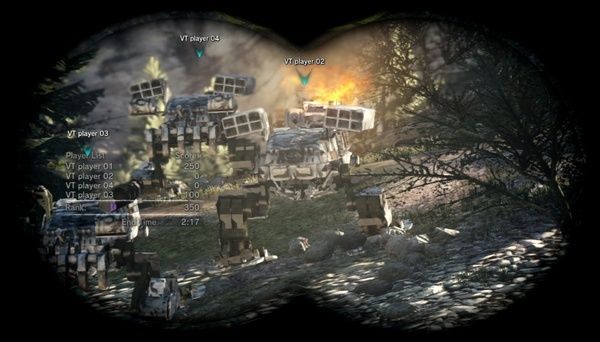 Steel Battalion: Heavy Armor is the follow up to Steel Battalion, a mech sim best known for its ridiculous controller peripheral. It was announced way back in 2010. We haven't covered it because Capcom claimed the game did not have co-op. A Microsoft rep demoing the game even denied co-op support at last weekend's PAX East. I guess things can change in a few days. It turns out SB: HA will support four player online co-op. Great. Now I have to attempt to bring the community (myself included) up to speed.

SM: HA takes place in the near future. Most high-tech items have been destroyed by a silicone-eating microbe, so it seems that humanity is left with WW2-era tech. The US has come under attack by new super powers, and must defend itself using new low-tech Vertical Tanks. Right now I'm picturing a darker version of Iron Brigade. From Software is developing the title, so I wouldn't be surprised if the game had an esoteric story as well as a high level of difficulty.

According to Capcom Unity, the co-op...

...will allow you and three friends to stomp the battlegrounds together on a variety of maps, earning new unlockable items with which to customize your Vertical Tanks. Additionally, you'll be able to unlock Achievements through a Score Attack mode, where you and your friends will be rated based on performance.

We don't know if the game will have a co-op campaign or a specific co-op mode. Score attack mode could be scored campaign missions, similar to those found in Halo Reach, or something else entirely. We'll keep you posted as we try to pry more information from the Capcom vault.

Did I mention that the game will require a Kinect controller? Because it does. According to the Amazon product description:

A wide variety of other combat-crucial actions are done through Kinect for Xbox 360 with upper body gestures - from starting the engine to operating the scope or manning the turret-mounted machine gun. Kinect for Xbox 360 also provides a means of interacting with your fellow crew members, from ensuring a panicked crew member stays focused, to a high five for successfully completing a mission.

This is fine for people like me. I actually like my Kinect. I'm also aware of its shortcomings. I don't know if I want to rely on my Kinect for operating a machine gun. I prefer to use it for cutting fruit or throwing possessed baseballs. There's a whole contingent of gamers our there (and by contingent, I mean everyone except for myself and Paul) who hate the Kinect. How much impact will Microsoft's peripheral have on the core gameplay?

According to Amazon, not much:

That's a relief. Who knows? Maybe people will embrace the hybrid control scheme. I wonder if the Kinect controls will alienate fans who already own a $250 physical mech controller...

We also have three videos to share with you so you can see the game in action. The first is from the announcement trailer from bakc in 2010, the others are more recent videos from Capcom's Captivate 2012 event.  The last video focuses on co-op play. There are more vids for SB: HA available on Capcom Unity's Youtube page, if you want more visual stimulation.

Steel Battalion: Heavy Armor supports four player online co-op. It will be available on the Xbox 360 on June 19th.

Here's the announcement trailer from 2010 to get you pumped. Are you pumped?

This is the more recent Captivate 2012 trailer.

And here we have four player co-op. Yup. Looks like co-op.