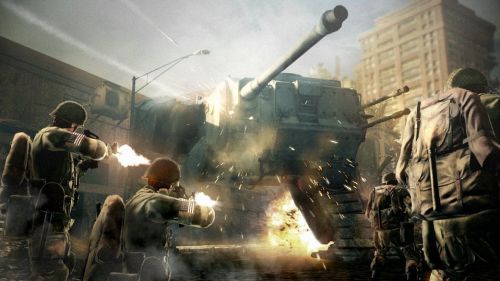 Hey, hey! This goes out to all you Steel Battalion: Heavy Armor fans out there! I know there's a few of you, because I just finished a co-op session with some highly skilled players. Well, more skilled than me, so I guess I should call them "skilled players," or maybe just "other players."

Map Pack 2 launched on the Xbox LIVE Marketplace yesterday. It offers two new co-op maps: "Ammo Dump Jump" and "The Champ-de-Mars." If you have already purchased Map Pack 1, your purchase of MP2 will unlock a bonus map called "Whiteout." I played through all three, and let me tell you, they're definitely additional maps.

My crew and I stomped through "The Champ-de-Mars," which takes place at the foot of the Eiffel Tower. We blew out some spotlights and then annihilated the remaining forces. We pretty much did the same thing in "Whiteout," which is, you guessed it, a snow map. We earned a "Star" ranking, the highest rank available, in both missions. We unlocked all the available gear in under fifteen minutes. The downside is that there's not really a reason to go back once you've unlocked everything --unless you really love this game, which I do. I also hate it. I tackled "Ammo Dump Jump" on my own and got my heavily-armored butt handed to me. There were several enemy VTs, so I may require some assistance later. Once again, I'm counting on you, Japanese players!