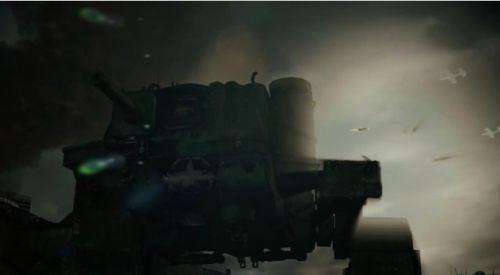 I have played the Steel Battalion: Heavy Armor demo, and it's... different. The mech game requires the use of both a controller and the Xbox 360's Kinect sensor. I've been curious about the title since it was announced back in 2010, even more so when a four player co-op mode was revealed last month. Do the Kinect and 360 controller play well together? Check out the following video to get an idea for how everything works.

This video features gameplay footage almost entirely from the demo, which is available through the XBLA now. The only thing I didn't experience was the NPC trying to "abandon mech." I did leave him hanging when he tried to fist-bump me in the tutorial, so there's that. I noticed two things in the video that don't jive with the actual experience:

First, I had to sit a whopping seven feet away from the Kinect sensor, and even then the game would tell me I was too close when transitioning between the standing and sitting positions. I'm talking from camera to the back of my chair. I found a sweet spot (total body coverage) at nine feet. Good luck playing in a dorm room.

Second, you'll notice our handsome gaming model (a career choice I wish I would have made many years and pounds ago) is sitting with his elbows on his knees, casually enjoying the horrors of mechanized warfare. No. This is wrong. The game actually warns you about your posture when it begins. It recommends using a couch or chair, as you will have to sit or stand throughout the game. Also, no leaning forward, no leaning side ways, and no holding the controller to your side. Seriously.

Overall the game played pretty well. Some gestures weren't picked up immediately, other were picked up twice if I didn't perform them quickly enough. The combat is almost exclusively tied to the controller, so when it's time to rock and roll you can forget about most of the Kinect fluff. The biggest problem I had was that the game would occasionally switch me from combat to cockpit view even as I remained motionless. Hopefully that can be remedied in the coming weeks before launch. Steel Battalion: Heavy Armor introduces a brand new four player online co-op mode via Xbox LIVE. Work together with your friends on a variety of maps to destroy a set amount of enemies and unlock new items to customize your VT with. In addition to this, you can unlock Xbox achievements by playing Score Attack mode where you and your friends will be rated based on performance.

It seems like we'll be getting a co-op experience that's more than a simple survivor mode, but short of a co-op campaign. Each player will pilot their own vertical tank, or VT. That may not be the case in the future. Eurogamer recently spoke with Capcom producer Kenji Kataoka, who shared some big plans for the franchise's future. He mentions making the cockpit more complicated, having a sixteen player versus mode, and allowing four players to pilot one mech:

Currently the multiplayer is up to four people, but in the next one we want to put four people per tank. At the moment you've got four people in one tank but you only control as the pilot. We want the left and right loader and the sub-comm all to be real players. So you share a VT among four people. And then we can make a game with co-op or we even want to do some versus.

I don't know about you, but if I'm not the guy shooting, I'm going to be furious. Maybe they could make it more exciting by having four different weapon systems. I just don't think many people will want to buy a video game and get stuck tediously loading cannons, no matter how big they are. We'll have to wait until the next generation of hardware to find out how this plan evolves.

We'll have a full review up in June where we will go into much more detail on Capcom's tank mech simulator. Steel Battalion: Heavy Armor supports a four player online co-op mode. It will launch on June 19th, exclusively for the Xbox 360.