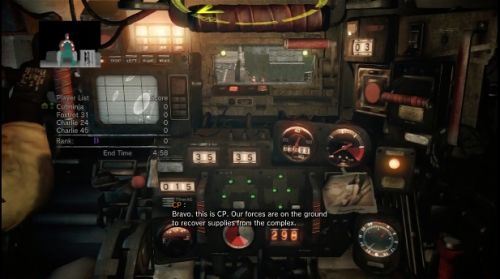 Holy cow! DLC has launched for Steel Battalion: Heavy Armor. I'm as surprised as you are. The game wasn't exactly a roaring success, but it does have a few charming quirks. Map Pack 1 quietly hit Xbox Live on July 3rd. It offers two cooperative missions for 240 MSP ($3). I rarely pass up the opportunity to throw money away, so I powered up my Kinect, moved some furniture, and took my Vertical Tank for a spin in new territory.

The two new maps are called "Fuel Requisition" and "Mountain Sentinels." The first mission involves a raid on a military base. You must dispatch several groups of RPG-armed infantry while not damaging the large fuel tanks that are spread throughout the facility. No problem. The second mission involves sniping some hillside artillery emplacements while getting pelted by enemy VTs. Slightly more difficult, but I passed it with a "B" ranking. Each mission offers three new customization parts apiece, for a total of six new additions to your VT. One of the rewards from "Mountain Sentinels" is a narrow view port, which helps protect you but reduces your field of vision to a sliver of daylight. It's kind of neat, and kind of horrible: I checked the available achievements and found that each mission offers 20 points for completion and 30 points for annihilation (killing all enemies). I also noticed that three other cooperative maps were listed: "Ammo Dump Jump," "Whiteout," and "The-Champ-De-Mars." These appear to be part of future DLC. Steel Battalion: Heavy Armor has its faults, and it's not for everyone, but for some reason I keep coming back for more. I know some of you out there are fans, too, because I found a few co-op partners for the new map packs. Thanks for playing!

Now if only they would sell some DLC that circumvents the Kinect controls, offers a third person view of the VT, and makes the whole campaign co-op. I'd be all over it! Sadly, I don't think that's going to happen.