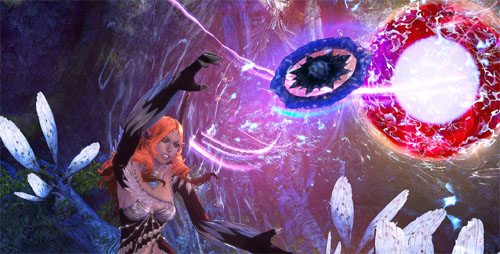 Last weekend at PAX East, I had the opportunity to check out TERA, an upcoming action MMO. Buzz has been in the air about TERA for quite some time, but it was only last weekend that I had a chance to go hands-on with it.

First things first. TERA advertises itself as a “true action combat” MMO, due to the fact that the emphasis is on skill, positioning, and timing to win fights. There is no point-and-click or tab-targeting. Instead, players aim most of their skills greatly akin shooter games. It will probably come as no surprise to you that TERA also fully supports a controller set-up in addition to standard keyboard and mouse. There are seven races and eight classes to choose from, and no factions to speak of. Everyone picks their allies and enemies regardless of race (and really, isn’t that how any idealized world should be?). At PAX East, there were a large number of PCs available for people to stop by and try the game out. These all had different classes set up on them so people could sample the various playstyles. My appointment, however, was quite a bit more exciting than what was on the show floor. My four other fellow reporters and I were treated to Twilight Valley, an end-game (levels 58-60) party dungeon. With a brief introduction to the dungeon, we dove right on in.

Our party consisted of a Lancer (the tank), a healer (I don’t remember if it was a Mystic or a Priest), a damage Warrior, a Sorcerer, and a Slayer (melee dps). I was assigned the Slayer. While I normally don’t play a melee dps role in other MMOs, I was pretty happy with this setup since I’d never set my hands on the game before in my life. Some of the other media folks had tried it at least a couple times before, and were thus given trickier roles.

As we played throughout the easier part of the dungeon, we were given tips in our headsets by our guides for the demo. While we were a little clumsy at first, with our helpful guide’s assistance, we soon began to really work together as a group. And just in time, too, because after only a few groups of weak enemies, we ran into the boss (or BAM - Big Ass Monster - as they are labeled in TERA). He was an enormous centaur-like monster with some killer charges and stomps. It became immediately clear that no one would want to stand in front of that thing besides our trusty Lancer. Our casters remained at range, as was fitting, and the Warrior and I attempted to stay behind the BAM. This sounds easier than it actually was. The BAM kept charging around and changing direction, and a couple times our Sorcerer actually drew his attention! Also, in addition to worrying about my position, I had a job to do. As the Slayer, my role was to try to knock down our enemy as much as possible. Not only did a knockdown prevent my party from taking damage while he was down, but we were also able to do extra damage to him as well. Several minutes later, the BAM fell like a tree. No one had even come close to dying! It was a challenging, but extremely satisfying experience, and despite the fact that I was in a role that I don’t normally play, I utterly enjoyed it.

TERA certainly looks to be a unique and action-packed experience. The open beta occurs next weekend (starting April 20th) with the game launching May 1st. It will have a standard monthly subscription.