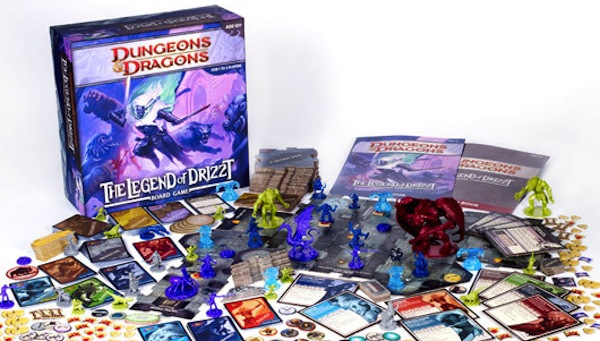 I'm a big fan of the new D&D co-op board games. Launched last fall by Wizards of the Coast, these board games have given D&D fans the option to adventure in the D&D universe without having to mess with all the rulebooks and long set-up. It's also made D&D a whole lot more accessible to more casual players. With two games out already, Castle Ravenloft (which we covered) and Wrath of Ashardalan, the upcoming the Legend of Drizzt marks the third installment of the series. They're all stand-alone games, but you can mix and match your heroes and whatnot across games.

This game (obviously) has a focus on R.A. Salvatore's ever-famous drow bladesmaster Drizzt Do'Urden as well as some of his companions. The fact that the characters are actually named and well-known this time around is not the only change Wizards of the Coast has made. To be more friendly to new players, the deck has been divided into two piles. The first pile is the "new player" pile which will help players learn the basics of the game. After played a couple games with the simplified deck, players can then upgrade to the advanced deck (which includes more monsters, treasure, encounters, etc.). The Legend of Drizzt also offers a new type of tile into the series: the cavern tile. They're only a quarter of the size of the regular tiles and let players experience a bounded board.

G4 has a short exclusive video of the game which you can check out below:

Legend of Drizzt is due out October 18.