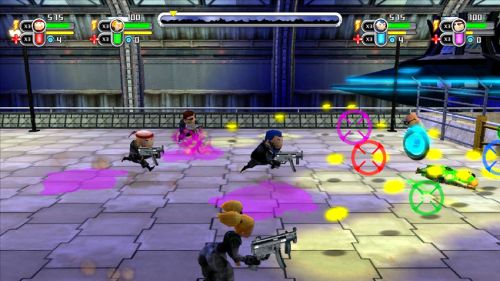 This one has me a bit confused.  The title of the game is called Majestic-12 and it's a retro style co-op action game.  Sweet I thought, that could be pretty chaotic with twelve players.  As I continue to read the description I read it says only four player co-op, ok, still cool in my mind.  But I read on and learn that you are one of only two surviving members of a group called the Majestic 12.  Let's dig deeper into this XBLA and PC game, shall we?

The game takes place in the future, in the year 2005.  Wait, what?  It's only Monday, why do they do this to me? The screens for the game showcase a cute-ish looking side scroller with numerous stylized characters to play as you shoot up many aliens.  Alright, I can get behind that.

There's no release date or official platform announcements other than PC and XBLA.  The game is being published by Reverbe and developed by Exis Interactive.