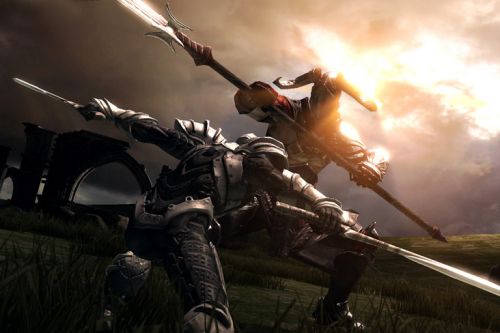 Fans of frantic finger swiping combat are already familiar with Infinity Blade 2. The excellent action game is one of the most popular titles for iOS devices. A recent patch changes the game from a solitary experience into a social undertaking of thousands. The new Clashmob is a cooperative social battle where players work together to accomplish seemingly impossible goals.

Once you have installed the patch, you can choose to enter the Clashmob at anytime, so long as you are not in battle. Once you reach the Clashmob menu screen you can enter one of the ever-changing challenges. For example, the two active challenges right now are "Get off my Land" and "The Survivor."

In "Get off my Land," players must collectively defeat 40000 enemies over a period of a few days. Thousands of players will participate. Basically, you need to defeat one Titan in a set time period to qualify. If you fail, you can try again. Check back later and see if the mob has prevailed and claim your reward.

In "The Survivor," the mob is tasked with surviving a fight against a high level enemy for 600,000 seconds. I lasted for one single second. Whoops. Sorry guys. Other challenges include fighting a boss with hundreds of thousands of hit points, collecting as many gold bags as possible, or only using particular moves to do damage. The Clashmob is in its beta phase right now, so we can expect some tweaks and fine tuning in the future. The one thing it excels at is keeping players, myself and other Co-Optimus staff members included, coming back for more. I'm always eager to play the next challenge and claim my reward.

The rewards range from XP and Gold to Weapons and Keys. If the mob succeeds the reward is yours. If you have friends on your social networks who also play Infinity Blade 2, you'll also receive bonuses (up to $15,000 gold) for each completed Clashmob.

This indirect social play really doesn't fit into our definition of co-op, but it's an interesting development in the mobile and tablet gaming market.