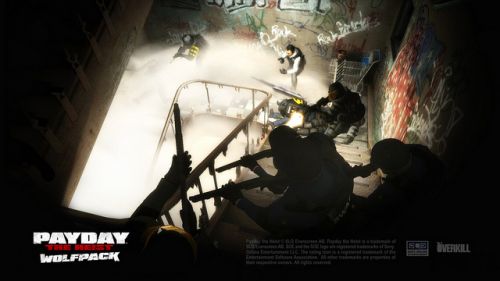 PAYDAY: The Heist is getting even more much-needed love. The criminally delightful squad shooter recently received some free DLC via a non-canon Left 4 Dead crossover: "Mercy Hospital." This Steam exclusive mission was a nice touch for the mouse and keyboard set, but what about the PS3 gamers? Don't worry your pretty little heads. Overkill Software has got you covered.

Next week will see the launch of the Wolfpack DLC. This new content will feature two new heists,"Undercover" and "Counterfeit." You'll get access to new weapons, a new character class, and a bump in the level cap. There will also be new Trophies for all the completionists out there. Check out the details after the break. New Weapons: Spray some lead on the move with the all-new auto handgun and assault rifle, or blow away tenacious foes with the shiny new grenade launcher. Need someone to watch your back? Release the deployable sentry gun to take out your enemies.

One Pays, All Play: Got friends in high places? If you are tight on cash until the next score, all you need is a friend with the content. The new heists can only be hosted if you own the DLC, but anyone with the base game can join for free.

Just When You Think You’re Out: With all-new Trophies and a raised level cap, there will be a lot more for you to brag about. PAYDAY: The Heist supports four player online co-op. The Wolfpack DLC will be available on the PSN on August 7th for a steal at $9.99. A PC release will follow.