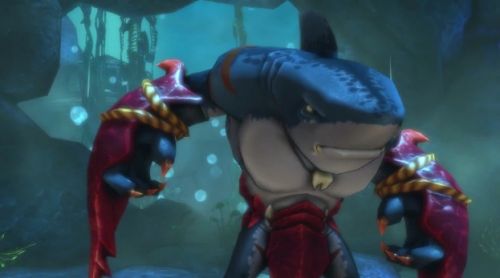 Dungeon Defenders, the super popular hack and slash/tower defense hybrid, has had a constant flow of DLC since its launch last fall. Much of the new content; accessories, costumes, and characters, is only available on the PC. However, the four part series, "The Quest for the Lost Eternia Shards," is available on both PC and consoles.

The release schedule for these new quest episodes varies with each system. As usual, PC gamers are at the front of the pack. They'll be able to download the latest part of the series, "Part III - Aquanos," tomorrow on Steam. It's an underwater adventure that features anthropomorphic sharks who use giant lobster claws for weapons. This which would sound ridiculous if it wasn't for that bad-ass picture at the top of the page.

PSN players will get Aquanos on May 15th, with an XBLA launch yet to be determined.

XBLA users will finally be granted access to "Part II - Morrago" today. Both PC and PSN users have had this desert DLC since April 10th (PCer's have had it since mid-March). What's the big hold up on for the XBLA version? Who knows? My guess is that either Microsoft hates fun, or it's the certification process. Either way, Morrago is out now on all platforms

Check out the following videos to see the shiny new content in action.

Part II - Morrago will include:

Part III - Aquanos will include:

Dungeon Defenders supports eight player online co-op on the PC. Four player local, online, and combo co-op are supported on both the PSN and XBLA. Each new quest DLC is priced at 320 MSP, or $4.