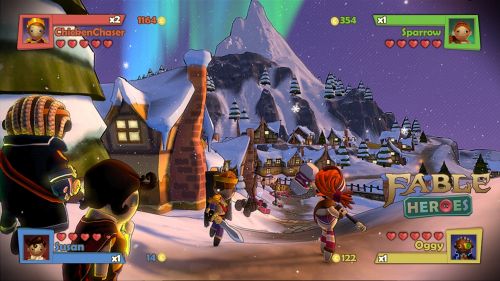 Happy Monday, folks! I hope you had a nice weekend. We've got a variety of co-op games coming out his week.

Awesomenauts (PSN, XBLA) Awesomenauts' publisher filed for solvency a few days ago, so this title may have a hiccup during its launch. It's still listed for release by both the PlayStation Bog and Xbox Live. We'll see what happens this week. 3 player online co-op, 3 player local co-op

Sniper Elite V2 (360,PC,PS3) Sneak around with a buddy in this title's co-op campaign. X-ray kill shots add a little something special for the prospective med students out there.   2 player online co-op

Fable Heroes (XBLA)  If you thought Albion couldn't get any more cutesy, you were wrong. Dead wrong. It's a hack and slash adventure for the whole family. 4 player online co-op, 4 player local co-op

Orion: Dino Beatdown (PC) What the heck? Didn't this game already come out, like twice last month? Hopefully there won't be any more delays. If there are, maybe someone will make a kick-ass Dino-Riders game.  5 player online co-op

As always, we have a list of the retail games hitting physical and digital store shelves today. Use the Amazon links provided below and help support Co-Optimus!