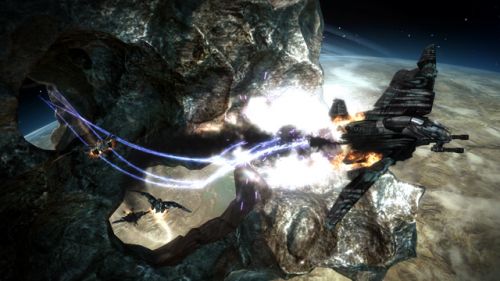 A new trailer has surfaced for the upcoming third-person shooter, Starhawk. The game's space western vibe is in full effect as we're introduced to "blue gold," the rift energy that drives the fortunes of men like our protagonist, Emmett Graves. This game is really tickling my fun zone. The beta was a blast and the gameplay footage from this trailer looks amazing.

The campaign appears incredibly co-op friendly. Emmett is seen in action along side numerous companions. Too bad it's a single-player only affair. That's right, there won't be a co-op campaign. Sad face. Check out the video and imagine what might have been.

All is not lost. Starhawk does have a  co-op survival mode. I know "survival mode" has become the standard tacked-on device used to earn the co-op checkmark on game box's feature list, but Starhawk's gameplay seems strong enough to carry this type of cooperative adventure. We'll know soon enough.