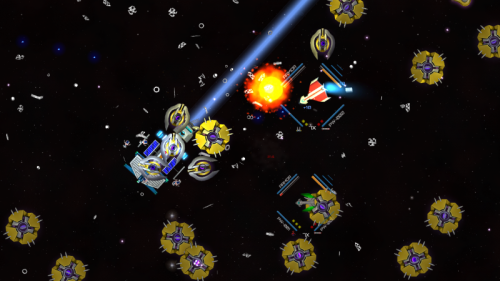 We recently received a tip from former Co-Optimus editor extraordinaire, Katrina Pawlowski, concerning a hot new indie game. SCHAR: Blue Shield Alliance is a four player cooperative twin-stick shooter - in space! We've mentioned it from time to time. It's being developed by a few current and former members of the Co-Optimus staff*, along with some other people who I'm sure are equally great.

Kat wanted to inform us about a new contest being held over at the BSA website:

We’re running a contest to name some of our in-game generators. I haven’t calculated exactly how many generators we have, but it’s easily over 100 total. Simply send me an e-mail, and you’ll have an opportunity to name a generator (if you’re going to be offensive, at least make it clever and cryptic, it’s an all-ages game) for credit in the game, and a chance to win a CUSTOM XBOX 360 (with skin provided by SkinIt.com) when the game launches!

Who wants an Xbox 360? You do, of course! Now, what is a generator, and what does it do? Simple. The generators power the shields which protect the planets in Blue Shield Alliance. They're one of the focal points of the game. Of course, many of you haven't had a chance to play the game yet, so why don't I let one of the developers explain some of the basic concepts:

Protect the generators from attacking bad guys. Use the scrap dropped by the destroyed baddies to repair the generator. Pretty simple, right? Now all you need to do is come up with a name for a generator, like "Goliath VII," or "Snoopy 2" and submit it to Kat@Blueshieldalliance.com. Be sure to include your name (so you can appear in the game's credits), email address, and your chosen generator name.

If you're interested in finding out more about SCHAR: Blue Shield Alliance I strongly recommend swinging by the BSA homepage. You can see the teaser trailer here and the first full trailer here. The devs have posted a ton of videos, dev blogs, and screenshots. We've even got some fresh screens in the following gallery. I've had some time with the game, and there's a lot more to it than simple twin-sticking. There are upgrades which directly impact several of your ship's stats, the enemies can be tenacious, and the writing will keep you entertained.

*Full Disclosure: I've played a few levels of the game, but  I have not worked on it.