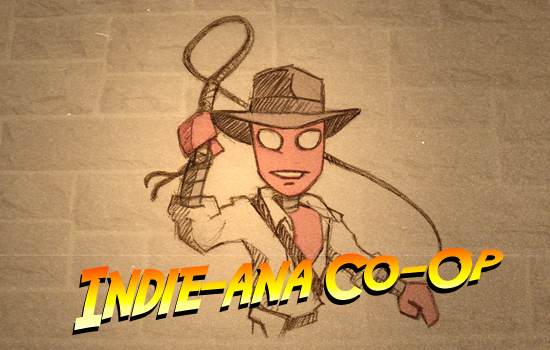 The days are getting longer, warmer, and just a bit more busy. Yes, summer is finally arriving and we've got some fun things planned for you all with our Indie-Ana Co-Op feature. Before we get there, though, we thought we'd do a quick retrospective of some of our winter and spring highlights.

This past winter saw the start of a new aspect of this feature, the Dev Stories - a chance for the developers of the games we love so much to really let loose and say what's on their mind. Whether it's how they came to implement co-op into their game, or determining what cooperative gameplay means to them, the indie developers have quite a bit to say when it comes to games. Though we've had just two entries thus far, plenty more are on the way; including one special entry from someone any Co-Optimus reader should know.

You're All in This Together The guys from Final Form Games, developer of the four-player indie co-op hit Jamestown, share their thoughts on what exactly defines cooperative gaming and how they came to realize it in their game.

Convinced of Co-Op's Value
Retrovirus was a new format for Cadenza Interactive, developer of the cooperative tower defense game, Sol Survivor. Though the team can trace its gaming roots to the multiplayer LAN parties of old, they knew that the ideology they used for designing the multiplayer component wouldn't be the same when it came to the cooperative gameplay. So, they found the fun in it.

While we did let developers just open up and let loose with the Deve Stories, we still constrained them some through the usual question and answer/interview format. We had the pleasure of speaking with Team Wanderlust, developers behind the action RPG/MMOish co-op title Wanderlust: Rebirth, as well as Jolly Corpse, developers of the upcoming puzzle/platformer Wyv and Keep.

Team Wanderlust Interview
Jason Gordy and Matthew Griffin make up Team Wanderlust. Wanderlust: Rebirth certainly isn't their first venture into games development, but it certainly has been a succesful one. Learn more about this duo's roots in our Q&A with them.

Q&A with Jolly Corpse
Born from the remains of another indie developer, the suitable named Jolly Corpse is comprised of the dynamic duo of Jesse and Beau. One of the interesting facts that came out of this particular interview was that Wyv and Keep''s development actually began several years earlier back in 2000. Find out more in the full interview.

Of course, we haven't forgotten about what makes up the core of this feature, and the site: the games. From action RPGs, to twin-stick shooters with a bit of a twist, there are quite a few indie co-op games that are worth checking out. We know there are at least two on the way that we think you'll enjoy.

We certainly hope you've been enjoying the Indie-Ana Co-Op feature, and we promise you that we've got plenty more in the weeks to come!