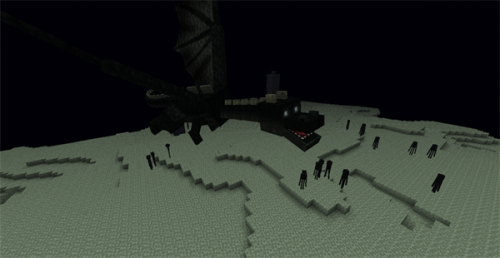 It’s unfortunate for those waiting patiently for 4J Studios to patch in Minecraft: Xbox 360 Edition’s end game mission, also known as “The End”, because it won’t be in the next update as promised.

Yesterday on Twitter, 4J Studios answered the ever growing number of questions on “The End” and its arrival in the next Title Update. The developer revealed that the quest will not be included into the Xbox 360 Edition in the 8th Title Update as was confirmed late last year. For those unaware of probably the most anticipated update yet: “The End” consists of the player gaining access to a mysterious, darkened dimension where they battle the legendary Ender Dragon and “finish” the game. It’s one of the most difficult things to accomplish (even with multiple co-op players), making it highly sought after for Minecraft fans. Taking on the Ender Dragon takes a lot of patience, skill, and a crap ton of arrows to defeat alone.

The delay in this addition is due to the developer being stuck taking time to fix many bugs that have rose from the last Title Update for the game this past December. It was planned out a while ago to come along with Title Update 8 on schedule, but the unforeseen glitches of this past update forced them to divert their attention to cleaning them up first. Answering a user comment about why it wouldn’t be included in Title Update 8, 4J Studios responded with: What are some of the bugs 4J Studios is ironing out? The “Kick Player” bug is quite the nuisance for people that wants to kick players from their worlds, but instead freezes their Xbox’s on the spot. Another revolves around an abrupt prompt that tells players they can’t go to sleep with monsters around.