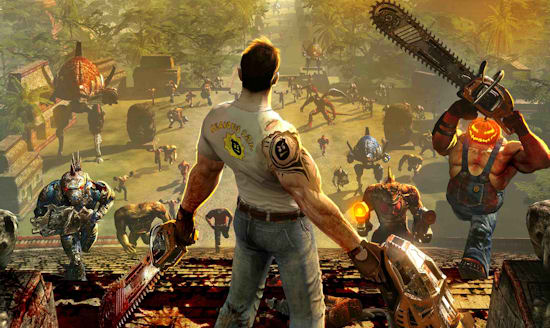 The Serious Sam games are known for their giant bosses, hordes of on-screen enemies, and crushing difficulty.  PC gamers had the support of 16 player co-op, while Xbox LIVE gamers had four player co-op capabilities (online only, sorry, no split screen).

Few details are known.  The Croteam website has this simple statement from CEO Roman Ribaric:

Just a quick note to let all Serious Sam fans know that Serious Sam 3: BFE is coming this summer 2011.

An official announcement should be coming soon.  Until then, we can only guess at which platforms the game will be coming too, or what kind of co-op support will be available.  Another mystery is the title itself, as there has been no explanation for the letters "BFE."  I think they stand for "Big Friendly Elephant."  How about you? What's your guess? Please, for the sake of the children, keep it clean.