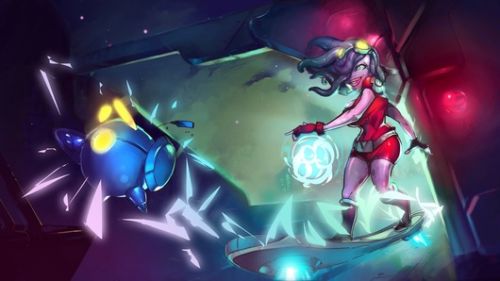 We just posted our Awesomenauts review yesterday, giving it a healthy 4 out of 5 in our Co-Op Review. One of our small complaints about the game was that its hero roster was quite small - only 6 heroes currently. It looks like that issue will be addressed soon with at least one new awesomenaut on the horizon.

The hero pictured above was officially revealed in a community press announcement a week after the game's launch. Virtually nothing is known about her, other than that she's the first female awesomenaut and that she's planned for the next patch (which will also include various game fixes and some balance changes). This apparently inspired some digging by fans, resulting in GameFaqs forum user MirrorB finding sprites and character sheets of not one, but two heroes in the game's system files.

According to the game's files, the teased hero is named Coco Nebulon. She rides on a hoverboard and attacks both in range and melee with electricity attacks. The second hero found is named Derpl Zork, a slug in a tank. The tank, called a combat walker, is stocked with turrets, traps, and explosive holocats. Yep, you read that right. Again, this is only what's been found in the files and nothing has been officially announced. We'll keep you guys posted.