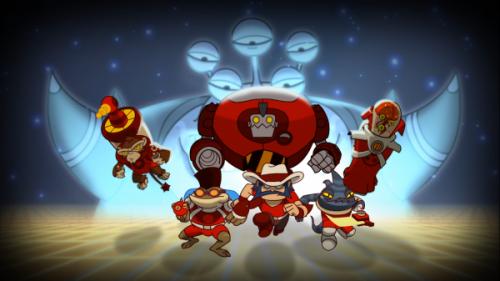 Fans of Awesomenauts can sleep peacefully tonight, as Ronimo Games has finally answered the relentless community requests for a PC version, now officially progress (with the Mac soon to follow).

Just like the trailer states, you asked for it, they listened.  Ronimo Games has announced the title’s debut to the PC platform, giving lots of gamers a chance to test out the co-op power of this amazing game. Ronimo Games Team Member, Fabian, has announced on their Awesomenauts Forum:

A few years ago we at Ronimo set out to create a great platforming MOBA (Multiplayer Online Battle Arena) game. This resulted in the release of Awesomenauts for XBLA and PSN a few months back. A great looking and addictive sidescrolling MOBA, a first for consoles. But ever since we've shown the first screens and videos, we've been getting tons of requests to also bring this game to PC.

Well, we agree! We love the idea of being able to play Awesomenauts with our friends through Steam using our trusty mice and keyboards. So we went ahead and actually built it! To speed things up we've been getting a lot of help and support from you guys, quickly translating new texts and giving us valuable feedback on the balance and new controls!

Check the new PC version of Awesomenauts trailer made especially for the supporters of this game (the Awesomenauts theme song is catchy as hell):

Scheduled for an approximated August release, players will finally be able to purchase the game via Steam, following with the Mac shortly thereafter. Not only that, Ronimo has begun their closed beta testing for the PC version during this week. Even if you already own Awesomenauts on XBLA or PSN, Ronimo Games has stated that it plans to update all versions of the game with new content, beginning with a console patch releasing in the near future.

For more hands info about Awesomenauts, please be sure to check out our killer, Co-Optimus review!