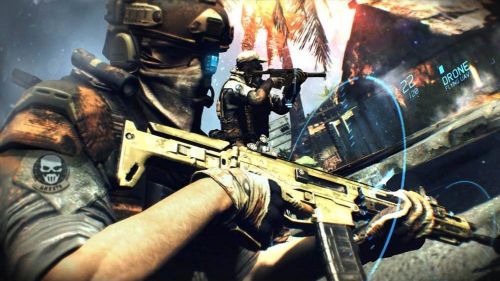 Some of the most fun I've ever had gaming was during Tuesday night matches of Ghost Recon Advanced Warfighter.  We used to play 12 player co-op against the AI, clearing map after map of random waves of enemies.  It's been five years since we've had a proper Ghost Recon game, but the day has finally come and it looks as if Ubisoft has stepped up all the pieces of the tactical puzzle for Ghost Recon Future Soldier.

Ghost Recon Future Soldier launches today on the Xbox 360 and PlayStation 3 with a PC version launching on June 12th.  The console versions feature four player online campaign co-op.  Other modes are available to play in split-screen.

The Co-Op Experience:  Team up through a co-op campaign that is said to span 12 hours, or play specific co-op modes.

E3 2011 Hands on Impressions - "I ended the demo with a smile, turned to the rep and simply said - "That last sequence was incredible, please tell me there's a lot more of that."  And more of it there is, apparently each mission will have these cinematic moments in them."

Inside Guerilla Mode (Details) - "By basing the Horde mode on real life tactics the gameplay differs from your usual swarm attacks. "

The PC Version is Back On

Screens from Gamescom 2011 - "Without a doubt the most stand out thing is the way the game integrates tactical information directly into the game world.  It's slick looking and makes me wish I had some sort of kick ass retinal implant to do the same."

A look at Gunsmith

We'll have our full review of Ghost Recon Future Soldier up next week.

There's also the Ghost Recon Alpha short film to get you in the mood.