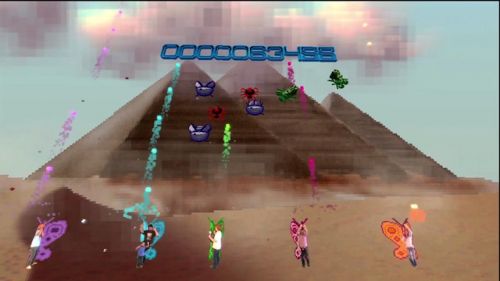 Double Fine's second Kinect title, Happy Action Theater, is not a traditional game. Rather it contains 18 minigames or visualizers that play one after another while everyone in your living room jumps around and acts a fool. The lack of structure made reviewing it tough, but we still loved its support for more than two players and general insanity. The game must have sold pretty well too, as Double Fine is already at work on a sequel.

The sequel news comes from a lengthy SF Weekly article on Tim Schafer and Double Fine that XBLA Fans has kindly distilled into TLDR form. Here's a choice quote from the original article:

In a recent meeting, designers spent two hours brainstorming different outlandish sequences for the game, such as one where a fox plays bongo drums on a series of eggs, out of which hatches a miniature version of the player.

That idea might not make the final cut, but it's wacky enough to fit right in alongside the original game's silly activities, which include dancing alongside Parappa-style 2D characters, players using their bodies as paddles in a brick-breaking minigame, floating around in space tossing fireballs at imps and other players, and lots more.

The Happy Action Theater sequel hasn't been officially announced just yet, so co-op details and even the title remain unknown. E3 is just around the corner though, so we should hear much more about this followup game soon.