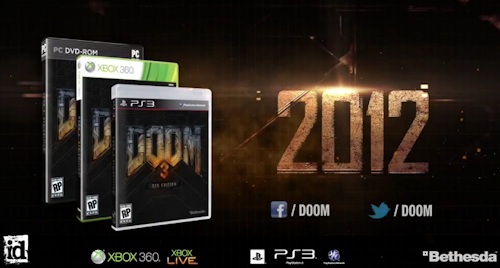 Remakes and rereleases are all the rage in the gaming world these days. Why, just today SEGA published two Vintage Collections on XBLA. Now id Software and Bethesda are getting in on the action with a deluxe remake of Doom 3 and its expansion, Resurrection of Evil for Xbox 360, Playstation 3, and PC. The newly-announced remake will not only improve on many of Doom 3's weaknesses and add new missions, it even includes Doom 1 and 2 as well. That's a Big Freaking Game collection!

Doom co-creator John Carmack's decision to remaster Doom 3 into director's cut form is sort of funny because Doom 3 was itself a modern, more horror-oriented reinterpretation of the first Doom. Still, I've been itching to return to Phobos once again, and the new features sound fantastic:

So far so good. But wait, there's more!

Those last two seal the deal for me. New campaign content is great, but not having to choose between the flashlight and guns will make the whole game so much better. id's efforts to correct all of the game's major criticisms this time out is commendable.

We don't know whether the Xbox 1-exclusive co-op mode will return in the BFG Edition. I sort of doubt it as original developers tend to shun the efforts of third-party porting teams regardless of their coolness. Resurrection of Evil's versus mode is quite likely though. The existing XBLA versions of Doom 1 and 2 already support co-op, so the ports included with the BFG Edition likely will too, ensuring our continued coverage.

Doom 3 BFG Edition comes to Xbox 360, Playstation 3, and PC later this year. We'll have more on this one as soon as possible!