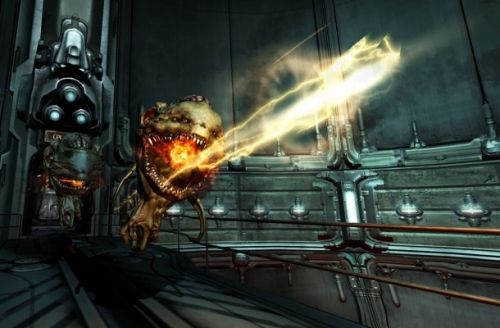 UPDATE: Sadly, it looks like some PR lines got crossed. No co-op in DOOM 3: BFG, only in the included DOOM 1 and 2 arcade titles.

When Betheseda and id announced they were remaking the beautiful-but-flawed Doom 3 for modern consoles and PCs, we reacted with a mix of excitement and trepidation. The big question for us: will it have co-op multiplayer? Thankfully, Co-Optimus has confirmed with the publisher that Doom 3: BFG Edition will indeed have some form of co-op. That's not much to go on, but every little bit helps!

The presence of cooperative multiplayer means we can continue covering the game up through its release and beyond. Speaking of which, Bethesda has announced the official release date as October 16 in the US and October 19 in Europe. For those who've somehow missed out on playing Doom 3 for all these years, a waiting a few more months shouldn't hurt too badly. And gamers who actually have owned the original game on Xbox or PC will breathe a sigh of relief when they learn the BFG Edition's price: $39.99 on Xbox 360 and Playstation 3 and $29.99 on PC. That's quite fair when you consider the lengthy list of enhancements this version will carry.

Speaking of enhancements: the Playstation Blog confirms that Doom 1 and 2 (included in this package) will indeed support 4-player split-screen. Presumably that means both co-op and versus play like the PC and Xbox 360 versions. Also, the new features like improved lighting and gun-mounted flashlight can be toggled off in case you're a purist and want to have less fun with the game.

We'll post more details about Doom 3: BFG Edition's co-op and multiplayer features as soon as we can. Stay tuned!