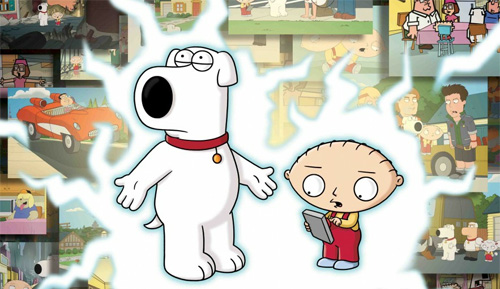 Fans of the TV Series Family Guy may remember a certain episode in which Stewie and Brian travel into several alternate universes, all done in different art styles.  The Road to the Multiverse Episode apparently was a grand idea for a couch co-op game, and so, Activision is making Family Guy: Back to the Multiverse with Heavy Iron Studios on development.

It doesn’t pick up from where the episode ended, but it continues the idea of Brian and Stewie travelling in the multiverse.  The game features a completely original story that sends the guys back through the Multiverse on a mission to stop Bertram.

Details on exactly how the game plays are still limited, but we're told the levels themselves will be themed (an Amish one was given as an example) and the comedy will be present as several of the show's writers are directly involved.

While the main campaign revolves around Brian and Stewie, it looks like other co-op pairings will make an appearance in special levels.  One such is Peter and Death.  I'm hoping for a Quagmire and Meg pairing.  Giggity giggity.

The title is set to come to Xbox 360 and PlayStation 3 this Fall.  More details of Family Guy: Back to the Multiverse will be revealed next week at E3 2012 - and Co-Optimus will be there to bring you the hands on coverage.