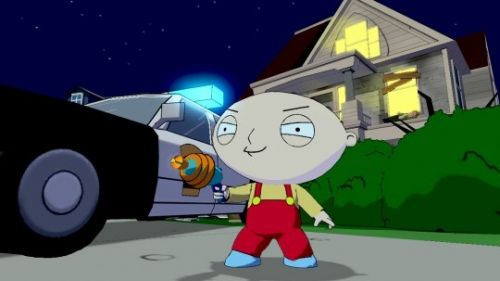 Do you know what really grinds my gears?  Games that are released soon, but don't have an official release date!  How am I meant to know if I can preorder the game, or whether it has slipped?  Family Guy: Back to the Multiverse was one such game until today.  The Griffin family et al. will be available on November 20th in the US and November 23rd in the EU.

Family Guy provides a 2 player local co-op game and will appear in a flash on both PS3 and 360.  You will step into the baby shoes of Stewie Griffin and the paws of Brian as they once more set off across a series of alternative Family Guy existences.  Rumor has it that you will also get to play as other characters from the series in special one off levels.  I just hope this game is more Simpsons: The Video Game and less Futurama: The Video Game.