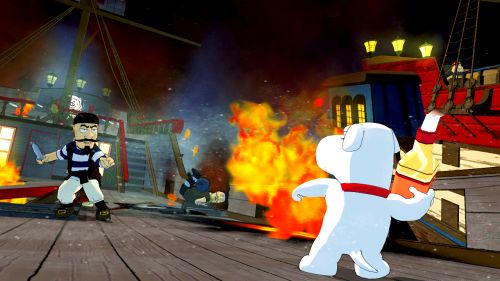 We've got a handful of new screenshots for the two player cooperative Family Guy game coming out on November 20th for the Xbox 360 and PlayStation 3.  Family Guy: Back to the Multiverse features Stewie and Brian on an epic adventure through time and the universe, with both characters playable in local co-op.

Stewie and Brian set sail for the high seas as they battle Long John Peter’s sea dogs (who stink of good cheer). Can they defeat the peg-legged enemies before they are forced to walk the plank?

If anything the quality of the game's graphics look to be very authentic to the show.  Hopefully the comedy holds up as well.