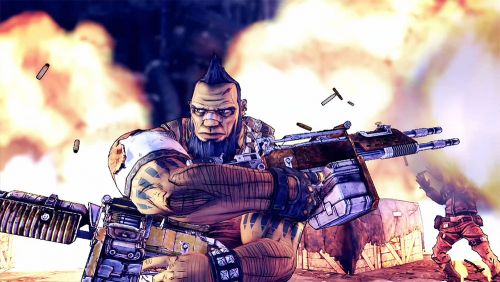 Remember Salvador, the Gunzerker? The star of the Borderlands 2 teaser from way back in August of '11? He's a dual-wielding dwarf. What else do you need to know? G4TV has some gameplay footage of the bad mama-jamma in action. The Pandoran native features skill sets that will allow him to do massive damage or just plain tank.

Not only do we get awesome double-barrelled love, we're also treated to footage of a new elemental attack called "Slag." Once you've slagged an enemy, all other elements do increased damage. If there's one thing I love, it's increased damage. Increase all the damn damage! Check out the video to see Salvador tear it up.

Spoiler alert: this WILL be my first character build come launch day.

Borderlands 2 features a whole mess of co-op support, including two player local co-op, four player online co-op, and combo co-op. It's scheduled to hit store shelves on September 18th. The shoot 'n loot extravaganza will be available on the Xbox 360, PlayStation 3, and PC.