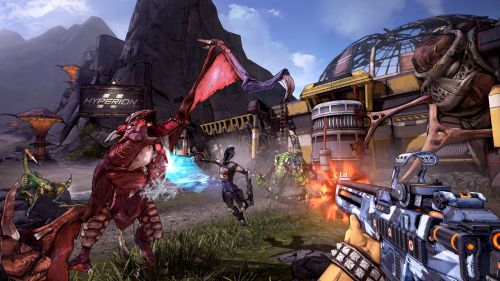 I know most of you have been totally absorbed with Comic-Con news, the Steam sale, and trying to avoid spoilers for The Dark Knight Rises (the butler did it). However, a few observant gamers might have noticed some of teeny tiny Borderlands 2 previews which came out last Friday.

Okay, maybe a few more than a handful. Jeez, Gearbox, next time you show off a game consider stopping by my house. I'll fill up the kiddie pool, cook some burgers, and let you play with my pugs.

A crap-ton of information was dumped on Friday. Some of it was a little spoilerific, involving minor plot details from the opening of the game. I'll avoid that info. I weeded through the filler (you know, the bits where people mention inane stuff like pool parties, burgers, and pugs) and found some tasty morsels that should hype your expectations: Badass ranks are coming: Anyone who played the original Borderlands should be familiar with Badass enemies. (Anyone who really played the game should remember Badmutha and Superbad enemies, as well.) Well now it's our turn. Not only will we be able to level up our characters, we'll be able to increase our "Badass" Rank. Completing various in-game challenges will reward players with Badass points.

You can use these points to increase certain stats, like rate of fire and recoil reduction, etc. The game will randomly select five of the fifteen available stats each time you upgrade, so you won't be able to max out your favorite stat right away. Wait! Don't pout. Everything is about to get awesome!

Truthfully, you'll never be able to max out your favorite stat. Why? There is no level cap to the Badass Rank system. You read that right. No. Frick'n. Cap. I don't know what that means to you, but I have several friends who stop playing games only when they've maxed out everything. I fear for their health.

Oh, and your Badass Rank is attached to your profile, not just your character. So when you start up a new character they'll have all the Badass bonuses from you previous character or characters. Increase your new character's Badass level, and you guessed it, your old character gets even more Badass. No word yet on if we'll be able to rank up to Badmutha (Badasser) or Superbad (Badassest). My badass fingers are crossed.

Don't despair, purists. If you are the badassiest badass that's ever badassed, you can turn off the Badass system and get down with your badass self. Totally badass. More customization: The original Borderlands was rather limited when it came to customization. If I remember correctly, you could change three of the main colors on you character. It was pretty vanilla. Borderlands 2 will offer players many more options, including interchangeable character skins and heads. The character heads could get rather interesting, if the bonus heads for Borderlands save game data are any indication. I'll pass on a Rakk Hive head. No thanks.

Loot, loot, loot: Players will be greeted with a mysterious gold chest early in the game. More legendary loot boxes will be located throughout Pandora. You'll need special keys to open each one. What's in these golden chests? No really knows, but the speculation is feverish. I hope it's a pony! -with howitzers for legs, and chainsaws for a face.

There will also be secret stash areas located throughout the land which will allow you to easily trade weapons between your characters. As someone who had to make two weapons mules, I can appreciate the convenience.

Borderlands 2 supports two player local co-op, four player online co-op, and combo co-op. It will be out on September 18th. Quite frankly, I can't ****ing wait.

*The source link will lead you to the Gearbox forums, where you can feel free to peruse the entire collection of Borderlands previews. Some of them are a little bit spoilery. You've been warned.