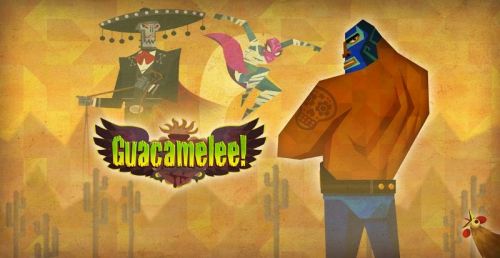 Welsh band Super Furry Animals, once sang to me that they needed medication for their sleep deprivation, GUACAMOLE!  Firstly, there is no need to shout and secondly, I may have found a cure for their Mexican dip based insomnia in the form of Guacamelee!  This 2 player local co-op platformer/action game is coming to PSN soon and appears to be as mental as that song.  Check out Read More, for details and a trailer for the game, the visual style may knock you unconscious!

Developers DrinkBox Studios have opened up the boxes named; crazy, imagination and Mexico, to create the strange mix that is Guacamelee!  Part action game, part platformer, there is also a liberal sprinkling of Metroid style discovery, and the presence of a chicken.  Starring Juan Aguacate, a down on his luck farmer, he must traverse both the worlds of the living and dead to rescue the love of his life.

To aid him, a second player can play locally.  The final part of the below trailer highlights some of the co-op aspects of the game, but why is it local only?  Interestingly enough, DrinkBox employee Graham Smith tackled this very issue on the PS Blog forums:

A bunch of people are asking about this topic.  From the developer perspective, online multiplayer is a *VERY* expensive feature to add. A few of us here have worked on multiplayer support on games in the past, and we know it can literally take man-years of work, split across multiple people, to get multiplayer support in to a game.  We also looked at the public reaction to bigger games that have local-only co-op (e.g New Super Mario Bros. Wii) and found that most people were pretty happy with the way those games turned out.

We have a fixed budget for Guacamelee, and so we had to make a tough decision to either spend a large amount of money and resources on making the game have online multiplayer, or instead taking that money and putting it towards the single player experience.  Our focus now is to make a game that players will really enjoy the single player. The co-op aspect of it is an optional (fun!) bonus if you have happen to have a friend over.

The expense of taking a co-op online is common one, but it is still nice when a developer explains their decision.  This refreshing attitude seems to be reflected in the fun game they are making, watch the trailer for all kinds of crazy: