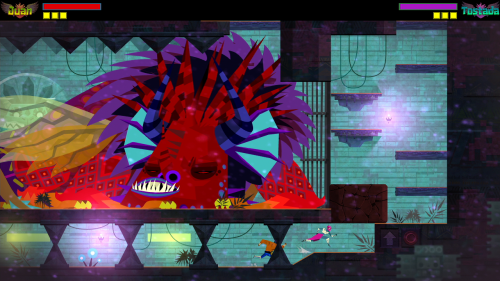 We had a chance to talk with Chris McQuinn from Drinkbox Studios at Penny Arcade Expo. They were showing off Guacamelee! which is based on something we all love, luchadores. Chris described the game as a "Metroidvania brawler" which features two player co-op, rooted in Mexican culture.

They were also demonstrating the crossplay functionality and it worked really well, as the Vita doubled as a controller and a supplemental screen displaying your map. This is very handy when playing a game that requires you to travel back to previous areas once you unlock new powers. Playing Guacamelee was smooth as it had a great balance between exploration and brawling. The platforming focused on swapping between the living and dead worlds, where some things would be present in each one. It made for some interesting puzzles and seeing the art style change between the worlds was beautiful.

The brawling aspect of the game felt really solid as well. As you unlocked new moves, you could really unleash some devastating combos on the enemies. It felt great to see the long pedigree of wrestling moves you could unlock for your luchador using the souls collected throughout the level. The integration of co-op into the fighting is really fun as well as I was able to uppercut a baddie into the air and my partner caught them and finished the combo with a satisfying air-suplex.

Honestly, this game came out of left field for me and it is something Vita owners can look forward to. Guacamelee! is set to release early 2013 on PSN and Vita.

If you don't feel like reading, here is the video interview with Chris McQuinn.