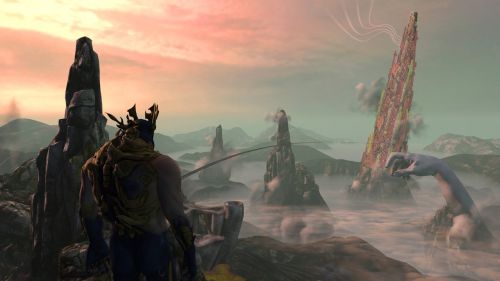 Atlus have announced a sequel to Zeno Clash, a unique game that saw co-op added in its 2010 iteration on XBLA.  The new game, titled Zeno Clash II, drops players back into the beautiful and rich world of Zenozoik as they experience this first person brawler.

As Ghat, players can fully and freely explore every natural and architectural wonder his world has to offer.  In addition to most of the characters, enemies, and items from the first game--all of which return with dramatic visual enhancement--Ghat can also expect to encounter awe-inspiring new sights, jaw-dropping new creature designs, and wildly creative new weapons and items.

While the brawler mechanics worked well in the last game, Ace Team is further refining them to support lock on abilities as well as pin point location damage.  Sounds brutal and ripe for a lot of nut shots.  Thew new game is also built from the ground up with drop-in/drop-out co-op supported throughout the entire campaign.  Player two takes control of Rimat, the main character's sister.  Co-Op is said to seemlessly affect the way the story unfolds.