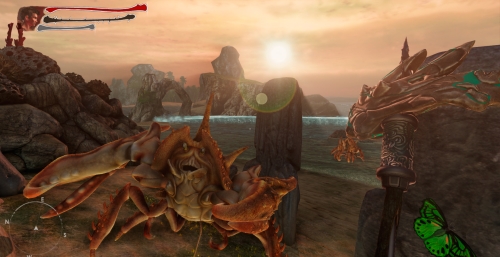 Release date time! ACE Team and Atlus recently announced the first person melee fighting game Zeno Clash II will hit Steam on April 30th, with the XBLA and PSN releases to come at a later date. Pre-orders for the PC release have also opened up, featuring several options that include discounts, free copies of Zeno Clash for you and/or your pal, plus a bonus digital soundtrack and artbook.

Co-op mode allows two players to punch all the things as they complete the single player campaign with a little extra muscle. For the sequel, the combat engine has been tweaked to provide more precise targeting, blocking, and extra-beefy high-impact hits to make sure you know you've knocked something with your fists. You can also lock onto targets, giving you some freedom of movement while dishing out the pain.

Pre-orders for Zeno Clash II are currently up on Steam. Do it! Punch the crab!