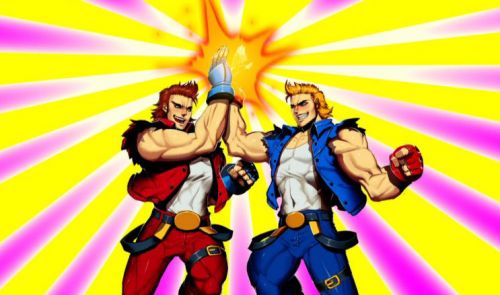 We've been getting a slow drip of material about Double Dragon Neon for the last couple months, so it was good to finally be able to put some hands-on time with it.  For those who need a refresher, it's a throwback to the classic brawler, complete with absurdly neon color palette and a really strong 1980s aesthetic.

Combat felt about like what you'd expect- you can string together punches and kicks in short combos to knock thugs around, with the added ability to throw as well as perform evasive rolls and a dash move. A "mixtape" system will allow players to equip your own loadout of special moves, though we didn't get a chance to check that out.

True to its arcade brawler roots, Double Dragon Neon features drop in co-op/out co-op via local or online play, and since this is a modern game, you can revive your downed partner. In a nice continuation of the mixtape motif, the icon to revive your buddy is a pencil jammed into the spool of a cassete tape.

The reason we were told that this game features a "bro-op" mode is because players can high five each other by holding the right stick in a direction. Each direction provides a different effect: a buff to attack damage, a chest bump that causes damage in an area-of-effect, a 'health split' move that brings the player with the lowest health bar up to the same health level as the highest. You can also fake the high five to grief your partner, though if both players try and fake each other out, the results are slightly embarassing for everyone.

In addition, Locke and I had a chance to sit down (well, stand) with Pete Rosky of Majesco to have a little chat about the game, so enjoy!

Double Dragon Neon should be out towards the end of Summer on Xbox Live Arcade and PlayStation Network.