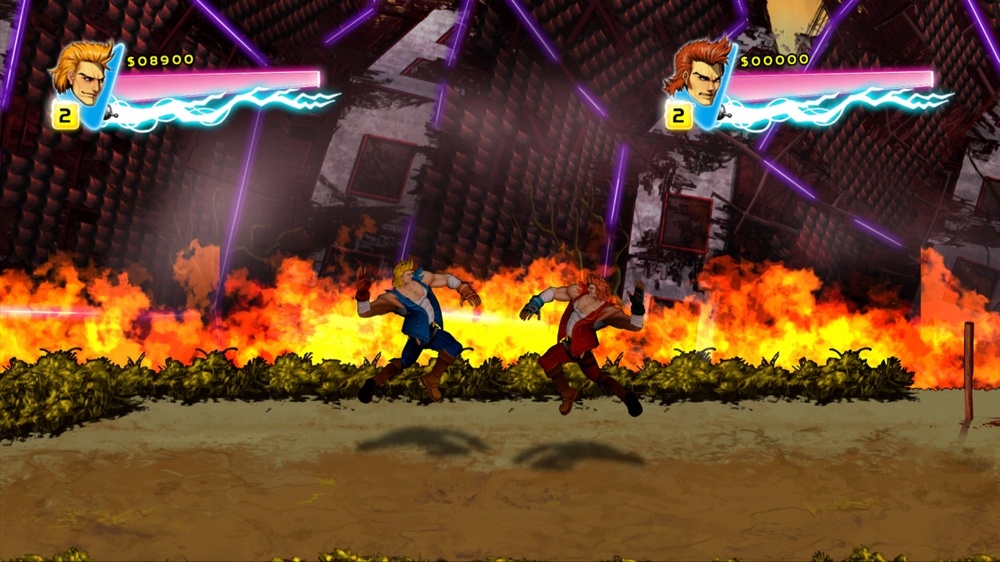 Double Dragon: Neon, the eighties-themed reimagining of the Double Dragon franchise is now available on both Xbox Live Arcade and Playstation Network. That's good! But publisher Majesco has revealed a bit of bad news at the last minute: the game only supports 2-player local co-op at launch. Don't worry, though - online co-op is "coming soon" in a post-release update. It's your basic Lara Croft and the Guardian of Light situation. Majesco probably should've announced the online co-op delay a little earlier so as not to mar news of the game's launch, but what's done is done.

On the plus side, Jake Kaufman's very good Double Dragon: Neon soundtrack is now available for free/pay-what-you-want on Bandcamp. Why not let the tunes ease your pain?

The Double Dragon: Neon soundtrack consists of 25 main tunes and 20 shorter Mixtape songs, for a total of 45 tracks. Fans of the franchise will enjoy new remixes of the Title Theme, Mission Bumper, Missions 1, 2, and 4 themes from the first Double Dragon and the Mission 1 theme from Double Dragon II. In general the new mixes are fantastic, though sometimes they degenerate into unrecognizable tunes as the song progresses. The beloved Title Theme pops up as a leitmotif in many of the game's tracks though, not to mention as a criminally short mixtape called 'Balance.'

Topping off the soundtrack are several lyrical songs. These new tracks imitate the eighties style, are often quite humorous, and perfectly fit the game's overall direction, despite being so different for a Double Dragon title. I fear many gamers will be too young to appreciate them though.

All told, the Double Dragon: Neon soundtrack doesn't quite measure up to the phenomenal PC Engine Double Dragon II: The Revenge soundtrack, but so few albums do. It's perfect for the new game though, and has enough of a classic flavor to please discerning beat-em-up fans. You can get the album here for whatever price you like (even free).

Double Dragon: Neon costs 800 Microsoft Points on Xbox 360 and $9.99 on Playstation 3. Playstation Plus subscribers can even get it free until January! Neon supports 2-player local co-op at present. We'll have a full co-op review next week.