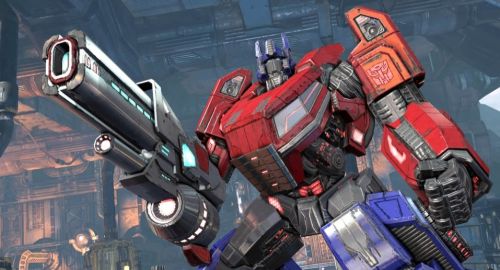 If you're like me, you've been ho-humming through the summer, waiting for the onslaught of upcoming fall games. There have been a few shiny distractions here and there, but nothing has really held my interest, until today. I fired up the new demo for Transformers: Fall of Cybertron and lo and behold, I actually wanted to play it again, and again, and maybe even one more time after that. I don't know if I'm that starved for the next big thing, but this demo at least provided an appetizer.

First the bad news: there's no co-op in the demo. Sad faces all around. Well cheer up! The playable Bumblebee and Vortex campaign missions are pretty sharp. High Moon has definitely taken a more dynamic approach to the campaign, including several set pieces in the opening mission. If you dug War for Cybertron you'll be right at home with the gameplay.

We posted this trailer yesterday, but it's so damn awesome, I decided to post it again.

The multiplayer portion makes up the bulk of the demo. You'll be able to customize your characters and jump into deathmatch and conquest (capture and hold postilion) matches. Players will be able to earn experience and unlock new customization options and loadouts. The level cap will be increased on August 10th, allowing players to access more weapons and customization options. I'm going to go work on my Starscream clone. Have fun.

Transformers: Fall of Cyberton supports a four player co-op, online Escalation mode. It will launch on August 21st for the Xbox 360, PlayStation 3, and PC.