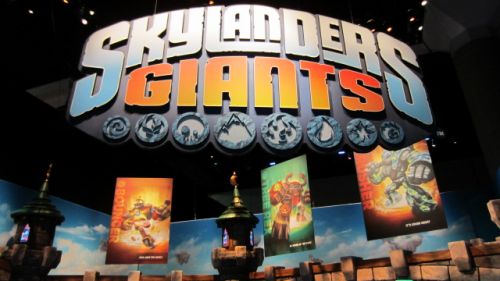 Skylanders fans, get ready for more adventures, more figures, and less money in your wallet. Skylanders Giants will introduce over 40 new figures to your plastic powerhouse stable, and you need them all. I spoke at length with an Activision rep while playing the new Skylanders title. Here's what I found out:

First up, as far as the core gameplay is concerned, there's not much new here. Like we've stated before, you will not need a new "Portal of Power." Skylanders is still a simple action title featuring minor RPG elements that you can enjoy with your child. Two player co-op is supported throughout the game. The new adventure can be played from beginning to end with your standard Skylanders characters. Of course, you'll miss out on tons of extras if you don't have a character for each element and at least one Giant.

Like the previous title, the depth of the gameplay depends entirely on the amount of figures you're willing to buy. I got my hands on two new Giants (Tree Rex and Bouncer), two new "normal" characters (Jet Vac and Pop Fizz), and a Series 2 Cynder figure.

Giant Skylanders are just what you'd expect. They're larger versions of the normal figures. They feature light effects which activate when they're placed on the "Portal of Power." In game they're incredibly powerful, able to clear swaths of enemies with ease. They can also punch through walls that normal Skylanders would normally need to bomb, as well as perform feats of strength to access new areas. Tree-Rex (Life) featured an illuminated jeweled gauntlet and glowing eyes. He also can drop a nasty Atomic Elbow. Bouncer (Tech) had a more subdued aura behind his eyes and chest piece. In game he has some sweet eye lasers. You CAN fit two Giants on one portal for giant co-op action.

I got a chance to play with some new normal-sized Skylanders: Jet-Vac (Air) and Pop Fizz (Magic). Jet-Vac used a jetpack similar to Gill Grunt. Pop Fizz drinks potions to gain powers.

Series 2 characters are reissued versions of old characters. They come in new poses and feature one new special move. All Skylanders, old and new, will have a new level cap set at 15.

Light core characters feature old and new characters that will have the Giant's light up capabilities.

Skylanders Giants will have two retail SKUs. One will feature the new game, a "Portal of Power" a Giant figure, and a normal figure. The other will feature the game and one Giant, the gateway figure for more giants. This holiday isn't going to be cheap.

Here's what you can look forward to (These numbers are subject to change):

Skylanders Giants should be out for almost every conceivable platform later this fall.