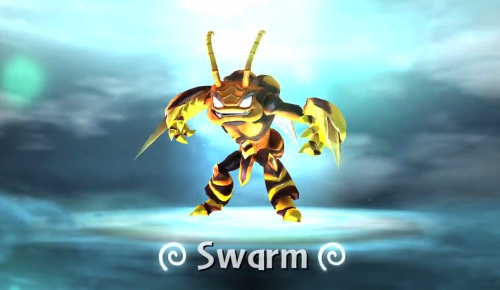 Skylanders Giants will be invading our homes on October 21st. The insanely popular franchise is back with a vengeance this year, and it has been super-sized for our buying pleasure. The action figure-based video game will feature eight new Giant Skylanders, eight new regular sized Skylanders, eight Light Core figures, and an assortment of reposed favorites from the original Skylanders. I've heard (or read) anywhere between eight and all 32 original characters will be getting the "reposed" Series 2 treatment. All that adds up to a lot of broke parents this holiday season.

If you happen to have missed out on last year's plastic hype-train, never fear. Newcomers to the series will be able to by the Skylanders Giants "Starter Pack." It will include the game, the Portal of Power, and three characters for $74.99. If you're like me, and have already sunk an unreasonable amount of cash into the little plastic bastards, you can pick up the "Portal Owner's Pack" for $59.99. It will include the game and one Giant figure.

The latest Giant, Swarm, has recently been revealed. You can see the big bee in action in the following video.

Skylanders Giants supports two player local co-op. It will form a small black hole in parents' wallets everywhere on October 21st. The game will be available on all major systems, including the Xbox 360, PlayStation 3, Nintendo Wii, 3DS, PC, and mobile platforms. For more information check out our hands-on preview from E3.