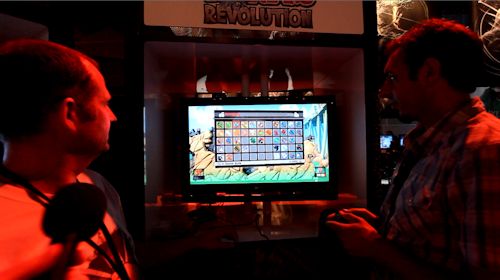 I've been playing Worms since the original came out on PC back in 1996.  If the theme song and intro didn't grab you, the addictive turn based gameplay and personalities of the worms definitely did.  The series has been through many iterations and sequels since, it's shifted from 2D to 3D and back again.  Now the game is in for a revolution, with Worms Revolution set to be released on XBLA, PSN and PC later this year.

So what's different about Worms Revolution?  The biggest change is a new class based system which gives you four distinct characters to choose from.  There's a scientist (light), soldier (balanced), heavy (heavy) and scout (speed).  Each one has their own advantages and disadvantages to choosing.  For example, the scientist will give your characters a small health bonus with a trade off himself of being more susceptible to damage.

The levels themselves are once again randomly generated across multiple terrain types.  There's one big change though - along side the game's normal water that is instant death on the bounds of the levels, there is now dynamic water that flows into the cracks and crevices as its created.  When a worm is stuck underwater they'll slowly lose health over time.  While the water is present at the start of the level, there's also new weapons like a water gun and water bombs that add to it.  Hitting a worm with water causes them to get caught in the current and is an excellent tactic for washing enemies into holes together.  Another feature of the levels now are dynamic objects that can be unglued from the environment and can cause damage.

While my hands on time with the demo pitted myself against Mike, the game does have full co-op support for both local multiplayer and online.  Just like the other Worms games there are plenty of zany weapons including returning favorites as well as some new ones.  We were told that more weapons and map types are going to be added post launch as well, so it'll be tough to get bored with killing those enemy worms in various and nefarious ways.

While Worms Revolution might not be a complete reboot of the series, it's definitely tweaked and changed enough to feel like a new game.  The water physics are really impressive and add another dimension to strategy that wasn't there before.  It was tough to get a feel for just how the character classes will affect the game, but we were told you can mix and match any number of them for your team - so it might be more pronounced if we did that.

Worms Revolution is set to come out XBLA, PSN and PC later this year.