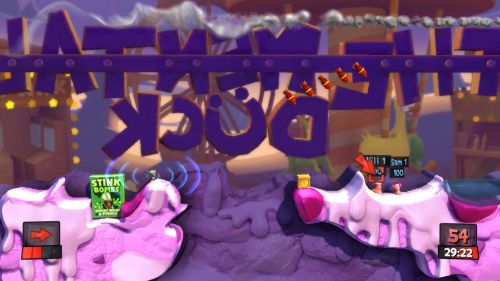 Worms Revolution may not be much of a co-op game (see our review), but it's still the best game in the Worms series. Packed with tons of weapons, all-new physics, and a wry sense of humor, it's a great way to blow up a few of your friends without having to clean up the mess afterward. Team17 always releases DLC for their Worms games, and now Revolution has its first release: The 'Funfair Pack.' How do a new background, puzzles, and dress up accessories sound to you?

The 'Funfair Pack' does not include new Achievements, though based on history we can be certain that one or more future DLC releases will. As such, this one's more about adding a quick bit of variety with weapons and the cheery backdrop rather than a substantial dose of content.