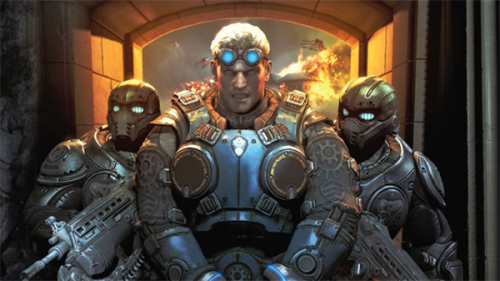 Wait, did we just see Baird and Cole in custody? The next issue of Gameinformer magazine raises a lot of questions as to what the next Gears of War game, Gears of War: Judgment, have in store for us. Fortunately, we’ve picked up a few tips from the nice people at Microsoft.

The next Gameinformer magazine shows us a different side to Marcus’ squad mates, who appear to have been taken prisoner for crimes previously unknown. Like Marcus shown in jail at the very beginning of the Gears 1 story, Kilo Squad (the new squad of 4 players will be playing as) is in quite a bind themselves. Before the start of Gears of War 1, the squad is on trial for crimes against the Coalition of Governments (COG). COG leader, Colonel Loomis, accuses Kilo of “desertion, cowardice, trespassing, theft of experimental military technology, and treason”.  That’s all we know about the backstory for now, however we did discover that unruly squad member of the original team, Baird, will be the central character of this game’s storyline.

We’ve always known that Baird was the type of character that never liked to follow the rules, or anyone that he felt wasn’t worth his time. But by popular demand, fan favorite Baird will be the main character in this story, as the other character’s tales have already been told. Epic Games’ Director of Production, Rod Fergusson, reveals why they chose Baird for this game’s focus:

Baird was a natural choice to us as the hero of the story because he’s a fan favorite. We’ve done surveys, and even with just the fan reaction to Gears 3, it’s clear that Baird is a fun character in and of himself. When you look at the stories we’ve told over the Gears trilogy, everybody else had their moment. The trilogy itself was Marcus’ story, very clearly we told Dom’s story, and even in Gears 3 we have that flashback moment for Cole when got to go to his locker room and he relives his past a little bit. But there’s never been insight to Baird’s character. We felt like this was a great opportunity to look back and see what happened with Baird.

As we said a few days ago, this game, will be a prequel to the Gears of War 1 title. 14 years before the game starts, players are put into the hands of Baird, Cole, and 2 new squad mates, Garron Paduk  and Sofia Hendricks, right as the beginning of the Locust War starts (Emergence Day). Now, it’s your goal to help humanity come together and fight a horde of foreign enemies that fight much like the Vietnamese did to the American’s in WWII:

For 79 years, the COG has been fighting a human enemy. They’ve gotten into the World War II sensibilities of what it means to fight, what war means. They have this specific way of fighting humans, much like America went through from World War II to then having to fight in Vietnam, which was completely different. There were completely different tactics and a completely different enemy. That’s sort of the way we feel this; this war presents a wake-up call to the COG that World War II tactics against a Vietnam-esque enemy won’t work anymore. It’s Baird who has the enlightenment that, ‘You guys are doing this wrong; we need to do it differently.’

Among the immense backstory that Gears of War fans will very much appreciate, this game will host a number of co-op modes to play in, such as Campaign and Horde modes. Even without a story, more Gears of War is never a bad thing. We just love to learn more about the characters we’ve come to know through many hours of co-op gameplay, this time being Baird’s turn. With that, we leave you with a first trailer of Gears of War: Judgment for you to enjoy.

Gears of War: Judgment is scheduled for release sometime next year.