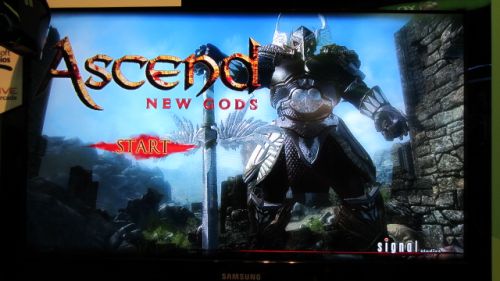 I saw the Ascend: New Gods trailer at the Microsoft press conference and made a mental note to check it out. Dark fantasy games have been trumping twitchy shooters for me, lately. I found the game on display in the Microsoft booth.

Like most people, I knew nothing about the title, other than there appeared to be some giant versus giant versus even bigger giant action. At the booth I asked if the game had co-op, and was informed that it would feature "parallel multiplayer." What the heck is that?  I would have to play the game to find out.

First, here's a little reminder of what the game is all about:

I know what you're thinking, "What the hell did I just watch?" Don't worry, the following video offers a much better depiction of the gameplay:

Got it? Not really? That's okay, that's what I'm here for.

When you first start up a game of Ascend: New Gods you chose your alignment. You take on the role of a Caos, a giant warrior dedicated to serving the Gods. You can work for either the Light God, the Dark God, or the Void God. Only the Light and Dark deities were available for the demo. Your lord of choice will affect your powers, but it won't limit your gear. Yes, there is loot, and I bought (and wore) a sweet light helmet to clash with my dark armor, because I'm that guy.

Your mission is to destroy  the rival Gods' shrines, kill their gargantuan titans, and impose your God's influence across the land. There's an assortment of other creatures to fight as well. Wolves, trolls, and large ogre mini-bosses lay in your path. Then there are the titans. Unfortunately, the demo ends right when the titan-bashing begins. (As the first video shows us, when something is much larger than you, jump on its face. It works for bugs.) As I played the game I was fortunate to a have Signal Studios' Logan DeMelt nearby to answer my questions. I First I asked him about the red and white phantoms (think Demon's Souls) that kept on running through my game. He informed me that they were other players. Then I asked if I could fight them. He said no, but they could affect my game with different curses or blessings. Looks to me like a Light worshipper just screwed a Dark servant.

While we talked  I continued to fight off trolls, wolves, and ogres with a rather simplistic combat system. Most creatures could be felled by a simple one-button melee combo. I also had some nasty impaling spikes and a meteor storm I could summon if I wanted to look extra cool. And there were plenty of humans around who kept on worshipping me, no matter how many of them I ate to restore my health. So far it was a casual walk in the park.

I noticed a group of wolves had just "warped" into my game. I handled them easily enough. Logan confirmed my suspicions that I had just been cursed. "Another player actually banished the wolves from his game into your world." What a jerk. I saw my saboteur's light willowy form running away from me. I wanted to pursue him and dish out my own curse, but I had an ogre to kill.

I then asked the co-op clincher: Could I disable random players and play only with my friends? He said I could. That sounds like a co-op game to me. Now, you don't interact directly with each other, but you can offer up helpful blessings, or banish enemies into your higher level buddy's area and let him deal with them. Nice. When I fought another Caos it was actually an AI-controlled representation of the player who sent it.

Overall, the game's combat system felt rather shallow. It's hard to gauge how robust the combat will be after only a short demo. There were plenty of items to buy in the shop, which may add a lot of replay value to loot hoarders. Your currency is souls. Go figure.

Oh, did I mention that the game will be Free to Play? Yeah, I should probably squeeze that in somewhere. This will be the Xbox 360's first F2P game. There will also be a large Windows Phone portion, but we didn't go into any depth in that area.

While I didn't find Ascend incredibly deep, it definitely scratched a particular itch. I find unconventional co-op, be it asynchronous, indirect, or parallel multiplayer, very intriguing. I don't know. Maybe I just like collecting fancy weapons and armor, eating humans to restore my life, and battling skyscraping titans.

Ascend: New Gods does not have a fixed player count, yet. The numbers I heard on the floor ranged from 8 to 32, but things change. Right now I'm going to say it will support at least four player indirect, online co-op. Logan did mention that there might be group bosses in the future. We'll have to wait until 2013 to find out more.