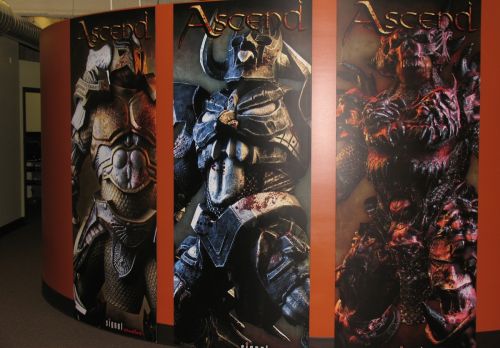 At Co-Optimus, we've always been impressed with Signal Studios' console releases. Toy Soldiers was a fine first outing, deftly mixing the tower defense and action genres with a dash of nostalgia. The follow-up, Toy Soldiers: Cold War really put the developer on our radar thanks to its addition of cooperative multiplayer. Signal's next game, Ascend: New Gods (first announced at E3) looks more ambitious than not only their previous games, but even a great many retail titles. While Ascend's initial announcement only mentioned the Xbox 360 and Windows Phone platforms, we're pleased to share some exclusive news with you today. It's coming to PC next year as well!

Signal revealed the PC version to us during a recent studio visit (I was in town for Casual Connect). While some details remain up in the air, we do know Ascend: New Gods will be content-identical to the Xbox 360 version. In fact, PC players will be able to interact with 360 and Windows Phone players and vice versa. A core part of the Ascend experience is connectivity across all platforms, helping to create one gigantic online world in which every player does his or her part in the ongoing 'Metawar.'

One interesting issue for the PC version will be that of distribution. The recent Windows port of Toy Soldiers took some flak from gamers for utilizing the Games for Windows Live platform (which has caused performance issues for some people). In response, Signal plans to issue a patch that will allow players to run Toy Soldiers with or without signing in through GFWL - even the Steam version.

The dual-boot approach is certainly a good way to please everybody, but will it be feasible for Ascend as well? After all, connectivity between PC, console, and mobile players is integral to Ascend. In each version, players can choose to cooperate with or hinder other players and factions. I could easily see Microsoft (Ascend's publisher) requiring GFWL/Windows 8 integration in the PC game if it's going to share data with other Microsoft platforms. Signal assured us that those issues are still being sorted out. With a projected release date of early 2013, they should have time enough to find a solution.

We'll have more Ascend: New Gods news to share very soon, including a look at how the game has progressed since the E3 build. In the meantime, check out the video above to learn more about the Windows Phone companion game, a brief mention of the PC version, and some insight into the origins of Ascend.