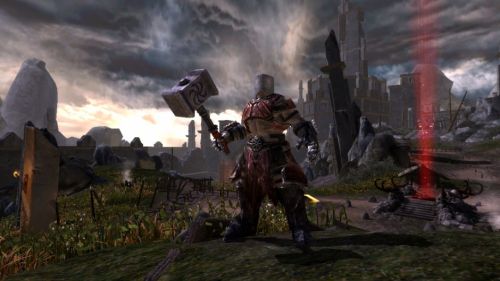 I've been curious about Ascend: New Gods ever since I first played it back at last year's E3. The free to play action RPG offers some interesting gameplay elements. A player's journey will feature parallel multiplayer, where players can curse or bless each other's games using Crusade Spells. These blessings include healing allies or turning their enemies into cows. You can also curse enemy players by banishing enemies from your world to theirs.

At least, that's how things were back at E3. Things change. The latest press release pushes the fact that you can invade other players worlds, a feature I was told could be turned off, allowing for a more cooperative experience. Ascend: New Gods may have become a more adversarial adventure, which is okay, but not really our thing. We'll have to wait and see just how the multiplayer interactions will work.

The Ascend: New Gods beta is open for registration. You can sign up by following this link. The game should be out later this year. It will be available on PC and XBLA, and there will also be a mobile aspect, as well. I'm sure more will be revealed at PAX East, which is happening this weekend. We'll keep you posted.