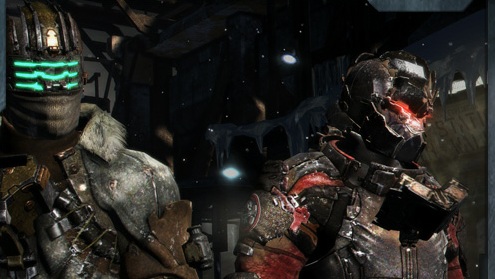 Oh no! Someone got co-op in an established horror franchise again! Never fear, horror fans, I assure you Dead Space 3 will still leave you trembling, or whatever it is you do when you're scared. The EA "booth complex" had a Dead Space 3 video which showed off the game's new co-op mode. I guess it's not really a "mode." They simply added drop-in/drop-out co-op to the campaign.

For those of you who are freaking out, afraid the atmosphere of the creepy sci-fi title will be ruined, let me put you at ease. EA has come up with an ingenious way of incorporating co-op play. I was able to watch a brief demo which showed two versions of a particular cut scene and battle. One featured the classic single player campaign, the other offered a glimpse of  co-op.

First, let's check out the E3 trailer and see if you notice anything special.

Does the new shared co-op experience ruin the horror game? Of course not! Co-op makes everything better!

Issac Clarke has a new battle-hardened buddy for this adventure: John Carver.  You may notice around the one minute mark that Carver spontaneously shows up and tries to save Isaac fro tumbling off an elevator. This footage is splice together from two different cut scenes.

The first video depicted the single player portion of the game. Issac goes about his business, Carver appears for a few lines of dialog, then leaves the scene. Issac is then free to continue on to a challenging encounter with a terrifying tentacle monster.

The second, co-op version of the same scene features Carver as a playable character. He's with Issac throughout the mission. After defeating the gruesome beast they go on to fight Necromorphs, humans, and humans who become Necromorphs. The fresh Necromorphs even manage to take a couple of clumsy shots at them.

The most interesting thing about the demo is that Carver is integrated into the cut scenes in entirely different ways. In the single player campaign he delivers a few lines of dialog from an elevated watchtower then disappears into the complex. In the co-op mode he's side by side with Issac and the two engage in continuous banter. Set pieces, like the elevator scene, are done in two different ways. It's a simple co-op solution that other games (like every Call of Duty campaign) have refused to implement.

The best part is that if you don't want to play co-op, Carver isn't by your side like some AI lapdog. He's off screen, doing whatever it is off-screen NPC's do. (Probably bitching about Prometheus.) Dead Space 3 will still retain its horror vibe if you choose to go it alone. I spoke with Visceral Games Matt Bendett to find out more information about the game's co-op support:

Overall, I liked what I saw in Dead Space 3. The ice planet definitely had a Lost Planet vibe. There was even a giant creature with an exposed weak spot at the end of the demo.  If we can't get our co-op fix from Lost Planet 3, the third Dead Space game might be a fantastic substitute.

Dead Space 3 supports two player online co-op. It will launch for the Xbox 360, PlayStation 3, and PC in February 2013.