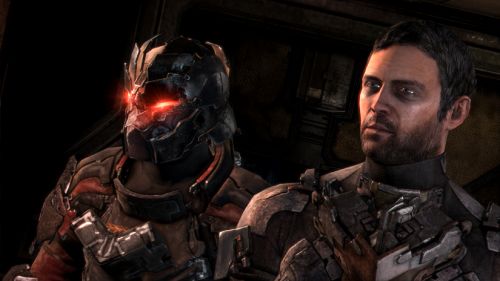 The new Dead Space 3 trailer is live, well, sort of. The action takes place on a derelict spacecraft, most likely orbiting over the frozen planet, Tau Volantis, depicted in the E3 demo. The video offers a tense glimpse of the dangers in store for Issace Clarke and his new co-op partner, John Carver. It's even got that repetitive, foreboding audio tone, so you know it's about to get real.

If you haven't been by the DeadSpace.com site lately, you should check it out. It has some new information about the weapon crafting system. You can even tinker with some parts and enter your creations into a contest. You'll also be able to share your crafted weapons with your friends, allowing them to see your blueprints and add their own customizations.

EA has also detailed the pre-order bonuses which will be available through participating retailers. You'll get access to two new suits as well as two new weapons:

From the looks of things, you'll need all help you can get. Be sure to bring a friend.

Dead Space 3 supports two player online co-op. It will hit store shelves on February 5th and be available on the Xbox 360, PlayStation 3, and PC.