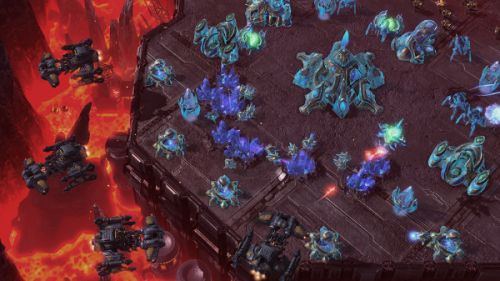 It’s always a huge deal when a StarCraft expansion is close to release, just like when the original Starcraft got a major facelift when it upgraded to the Brood War expansion. Now, StarCraft 2 will be unleasing the1st of two expansions: Heart of the Swarm with new units to command.

Blizzard has officially given fans a quick look at the upcoming units being carefully integrated into StarCraft 2’s online gameplay. Unfortunately, we don’t know when the official beta will begin. However, we do want people to be aware of the changes Blizzard will be making and to keep the game as balanced as humanly possible before the game is released.

What kind of changes will be seeing to the three StarCraft races? You’ll be quite surprised at some of their new abilities and upgrades being granted to them. But first, take a quick look at the new units in this trailer for a better idea of what to expect:

Swarm Host – This is intended to be a Zerg artillery unit. Swarm Hosts continuously fires swarms of locusts at both land and air units, making it perfect for defense or for laying siege to an enemy’s base without losing any minerals in the process.

Viper- Known as a "battlefield manipulation unit", the Viper has the ability called “Abduct”, allowing it to snare and draw units toward it with a long tendril. Its second ability is called “Blinding Cloud”, giving the Viper the power to create a zero visibility environment that reduces enemy range values to zero.

Ultralisk – The once extremely slow unit will now be able to burrow underground and charge forward for quicker attacks. This makes the Ultralisk an even more valuable unit to use for killing enemy units, as well as structures.

Hydralisk – Granted a much needed speed boost, Hydralisks will now be faster while in close proximity to the hive. This makes them perfect for defending your base from Mutalisk and Phoenix harassment, and allows the Zerg race to be even more mobile.

Oracle – A future favority, this harassment unit can use the ability "Entomb", preventing enemy resources from being able to be mined. Not only that, it can cloak nearby buildings by casting the ability "Preordain".

Mothership Core – This upgrade is made available as soon as you have the required resources. Not only can it teleport massive groups of Protoss units directly to any standing nexus, but it can also use "Purify" to defend base from enemy assaults and feed energy to spellcasting units.

Tempest – This elite Protoss ship targets one enemy at a time, unlike the unpopular Carrier. I don’t know if this will make it into the final version, but it is said that an upgrade for this unit will make its range nearly twice the range of a Siege Tank’s (very long range).

Battle Hellion – Now the Hellion vehicle will be able to transform from its normal, speedy, lightweight form, or to a hefty tank-like unit with stronger attack capabilities.

Warhound – Originally designed as an anti-mech units, Warhounds will have two different attacks for you to choose from. One will be a cannon which targets anything manually, or missiles that will automatically target enemy vehicles on site. Don’t like using micro? Then this is the Terran unit for you.

Widow Mine – Much like the Spider Mine from Brood War, this unit burrows into the ground and attaches itself to any passing enemy (including airborne units). After 10 seconds, the unit will explode for 200 damage splash damage, but it won’t explode if attached unit dies before that. Use them strategically!

Reapers – To make the Reaper a more viable “scouting” unit, they had their anti-structure bombs removed and now instead recharge health when not in battle. Reaper harassment has just returned to competitive play.

Battlecruiser – Not an official future change, but Blizzard is experimenting with a speed boost upgrade for the Battlecruiser. This will make the expensive Terran vessel much easier to use on the battlefield, without being chased down and destroyed by faster units. Many hardcore StarCraft 2 fans were skeptical of some of the new units being introduced to online play, mainly because they’ve played the game religiously (some as a means of living) and understand the game’s mechanics like the back of their hand. It will be interesting to see what these new units will do to change the current metagame for 1v1 and 2v2 in the future.

Until Blizzard decides to finally release a date for Heart of the Swarm, we can only speculate as to how each unit will affect the outcome of StarCraft 2's future.