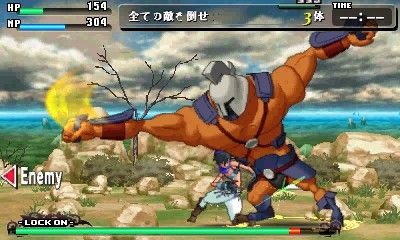 While visiting the Atlus booth at E3 and ogling Persona 4 Arena, I noticed that there was a small 3DS demo station tucked into the back corner. Upon further inspection, I discovered that there was a playable build of the just-announced Code of Princess, a 2D side-scrolling brawler due out this Fall.

From what I understand, the developer, Agatsuma Entertainment is made up of a gathering of ex-Treasure developers, whose resume includes favorites like Gunstar Heroes, Mischief Makers, the original Sin & Punishment and Guardian Heroes, which this title draws heavy inspiration from.

The demo only had single-player available, so I dropped into the story mode, picked one of the four characters that looked the coolest and was greeted by what appeared to be a familiar 2D brawler, but there's more to Code of Princess than a screenshot can show off. First, rather than freely moving throughout the play area, players and enemies are limited to three 2D planes of movement - a foreground, midground and background. If this sounds familiar, it's because Guardian Heroes also used this mechanic.

Rather than simply hack and slash your way through the enemies, your attacks are a lot more deliberate, and grouping enemies together to hit them all at once seems to be the best way to go about things. You've got a standard melee attack, a spell button and a lock-on attack, which causes all of your spells to target whatever enemy you tagged. Sometimes, obstacles will appear on one of the planes and you'll need to maneuver your way around 'em. It took more than a couple missions and bosses before I *got* what the game was going for.

An Atlus representative assured me that the final game indeed has both cooperative and competitive multiplayer, but didn't know off-hand the number of players or other details. Hopefully we'll know more soon, as the game will be releasing this Fall.