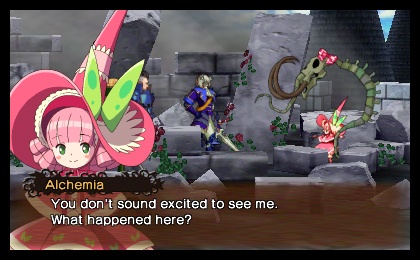 If there's one game that makes thi writer really wish for a 3DS, it's Code of Princess from Atlus. The spiritual successor to Guardian Heroes (much as Crimson Dragon is the successor to Panzer Dragoon), Code puts beat-em-up gameplay, a deep story, RPG mechanics, and tons of characters into a bowl and mixes them together. The results sure look tasty, as this new batch of screenshots proves.

Last time we mentioned Code of Princess, Atlus had just announced the first run of the game will include a Premium Box with an artbook and soundtrack CD. Now they've created an official unboxing video so that readers at home can know what opening the box will be like. I don't know why anyone would care about unboxing videos, but then again, you might not enjoy my favorite videos either. So here you go:

Code of Princess comes to 3DS on Tuesday, October 9 both at retail and for download via the Nintendo Network. It supports 4-player ad-hoc co-op.