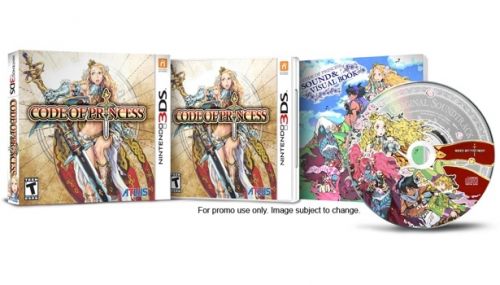 If there's one thing the good people of Atlus know how to do, it's promote the heck out of a game. Case in point: they've just released a third trailer for Code Princess, the 3DS beat-em-up/RPG that's coming in October. Okay, Atlus has another specialty: beautiful premium packaging and bonuses for launch copies of many of their titles. Code of Princess gets the deluxe packaging treatment too, providing a nice incentive for fans to preorder.

Not a bad trailer, huh? As you can see, Code of Princess is very much a spiritual successor to Treasure's Guardian Heroes. That should come as little surprise, as some of the staff actually came from treasure. With beautiful character designs, more than 50 characters, 100 quests, and 4 player ad-hoc co-op, I'm both impressed and jealous that this game isn't coming to XBLA and PSN. It really, really should.

Every launch copy of Code of Princess includes both an artbook and music CD. If you're wondering what the book's contents will be like, check out this sample, which features a two-page spread and a selection from the soundtrack.

Code of Princess comes to 3DS on October 9 both at retail and for download via the Nintendo Network.