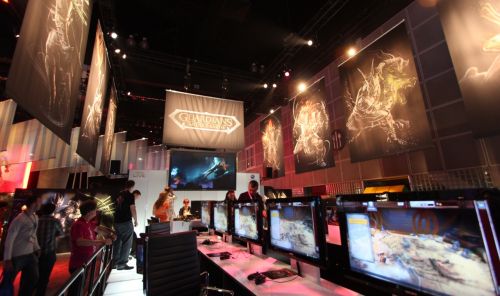 I love surprise games at E3.  These are the games you've either never heard of or never had any interest in.  For Guardians of Middle-Earth, an upcoming MOBA from Monolith, the game was a pleasant surprise on many levels as it was just announced right before the show.

Guardians of Middle-Earth is a traditional style multiplayer online battle arena game like League of Legends or DOTA 2.  Players control a hero that levels up as you kill enemies and take down strategic points throughout the map.  Each time you level up you unlock new abilities and items for use within the match.  While most of the 20 heroes of Guardians of Middle-Earth will be familiar (I rode with Gandalf) the team at Monolith has picked a few obscure ones as well.  Thráin, the father of Thorin Oakenshield, is one such character, with numerous others to be unveiled over the next few months.  These characters aren't just the "good" ones either, there are plenty of minions to choose from as well.  We saw the likes of Gollumn, Sauron, and others roaming the battlefield during our match.

What is perhaps most surprising about Guardians is that it's not a free to play game on the PC, but rather a downloadable title on Xbox Live Arcade and PSN.  It'll be priced between $15-$20, with of course more heroes and maps coming later as DLC.  Because of the console design decision the entire interface is built around a controller - and frankly - it just works really well.    You'll control your hero with the thumbsticks and activate skills mapped to the four face buttons.  The level up menu is built into the trigger and you simply tap the button you want to upgrade.

We were told the game is meant to be accessible to new players, and easy to use controls are just the first step.  To help players keep track of what exactly happened after dying, there's a replay sequence that shows exactly how a player met their end.  It's a detailed list of items that can be drilled down into to show the numbers behind your untimely demise. While the core of the game is the versus experience, co-op is just as important to practice your skills.  We were told full 5 player co-op gameplay will be available.  Mike and I jumped into a versus match as Gandalf and Legolas.   While most of Gandalf's abilties seems pretty straight forward, like the Flame of Anor which shields allies - it was his super ability to call in a giant Eagle that entertained me the most.  These abilities takes a long time to recharge, so I was only able to use it twice during our 15 minute match, but when it was unleashed it was hard not to smile.  The controls worked well, the graphics were solid, and after a few minutes I had my bearings no problem.

I've got to be honest, I haven't been much of a fan to the MOBA genre, only dabbling here and there - but Guardians of Middle-Earth had me hooked after just one match.  This could be one of the biggest downloadable titles this fall if the community comes together and there's the strong online persistence that is being promised.

The MOBA genre is something that I've always been interested in, but attempting to jump into an established community like League of Legends or DOTA 2 as an inexperienced player is a good way to get yelled at by jerks on the internet, so I've shied away. Guardians of Middle-Earth, on the other hand, does a fantastic job of easing a new player into the genre, and it makes a ton of sense to set a MOBA in the LoTR universe.

As Legolas, most of my abilities were focused on ranged attacks, as bow-slinging nancies tend to favor. I could snipe with a power shot from a distance, or pepper a group of enemies in a frontal cone AOE with arrows. Legolas' ultimate ability fires a devastatingly powerful arrow into your enemy, knocking them back and debuffing their damage resistance to almost nothing. Round this out with a stealth to backstab maneuver, and you've got a pretty effective offensive arsenal.

Despite being relatively new to the genre, Nick and I teamed up and did pretty darn well - we were the top players on our team and our team won the match. If the team at Monolith can figure a way to keep the characters balanced, and not charge obscene amounts of money for new heroes and maps, I'd say they've got a winner on their hands.

Guardians of MIddle-Earth will be out this fall on Xbox Live Arcade and PlayStation Network.